Shabbos in the White Mountains was pleasant.  The leaves are starting to turn, and the air was crisp and clean.

Today we drove southwest towards Saint-Gaudens National Historic Site, which preserves the house and studios of Augustus Saint-Gaudens, one of America’s most prominent sculptors.  We arrived at the town of Windsor, Vermont, and discovered that we could not get across the river as the bridge there is the Cornish–Windsor Covered Bridge, the longest wooden covered bridge in the world with a height clearance of less than ten feet.  We left the RV in Windsor and drove to Saint-Gaudens.

The sculptures at the park are castings from the same mold as the first casting, and are considered originals although the more well known casting is installed elsewhere.

Saint Gaudens started his artistic career as a teen apprentice to a cameo maker.  These samples of his work were on display:

Gaudens was asked by Teddy Roosevelt to create coinage for the US.  Gaudens’ $20 gold Double Eagle coin is considered one of the most beautiful coins of all time, but the coin had such high relief that it took nine strikes of the coin stamp to create the coin.  The designed was later flattened to a three-strike version, and finally to a one-strike version which was practical for commerce and put into production.  The US Mint ran created a set of the ultra-high relief nine-strike coins in 2009.  Its hard to tell from the photograph, but the coin is about three times the thickness of a quarter and the design has much more depth to it than a standard coin:

We spent some time talking to the artist in residence, who is producing a commemorative sculpture for the 50th anniversary of the site.  We learned that the initial sculpture is made in clay, then a mold is made with flexible rubber, then a wax positive is made, then a plaster mold of the wax is made and into that mold the brass is poured for the final sculpture:

The Adams Memorial, which also stands in Washington, DC:

The Robert Gould Shaw Memorial, which took thirteen years to create.  The original stands in Boston:

Back on the Vermont side of the river, we visited the American Precision Museum, birthplace of the precision tool industry and the first factory in the US where interchangeable parts were made.  Here in the 1850s, rifles were made for the first time by machine, with each worker producing one part of the gun, rather than an entire rifle being manually produced by a single craftsman:

The museum had a “you build it” play area:

An early lathe with a granite bed:

This sanding machine creates wooden rifle stocks from the steel master form in the background:

An inletting machine, which carved out a portion of the gun stock to allow the insertion of the steel lockplate:

Trying out a test gauge, which can be quickly used to check if a part is machined to the correct size:

The docent demonstrated how to make a gear from a brass disc blank:

The completed gear, as well as two brass goblets made from a length of half-inch brass rod stock:

Part of the museum was devoted to John Aschauer, who spent 25,000 hours making miniature models of machine tools.  Even the screws were made by hand: 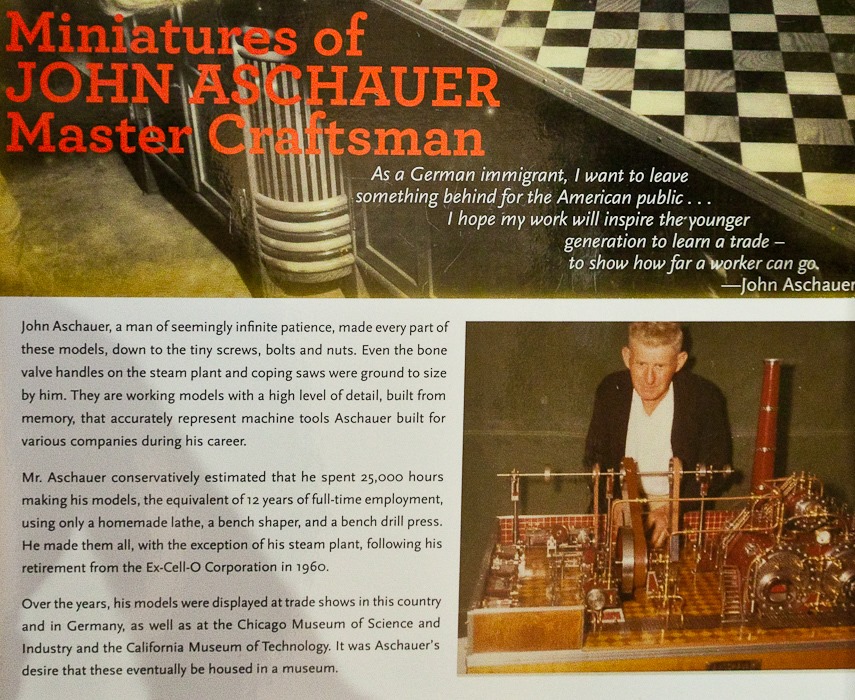 A universal milling machine, built in 1861:

This Bridgeport Milling machine, made in 1938, is serial number “1”:

It’s a mill, it’s a drill press, it’s a lathe, it’s the Gillman 4-in-1 machine built in 1940, used on Navy ships where there wasn’t room for a full machine shop:

After leaving the museum, we hitched up to the RV and drove north to overnight at the Walmart of Lebanon, New Hampshire.

One thought on “Day 774: Saint-Gaudens NHS and the American Precision Museum”