Unfortunately, the weather today was not conducive to flying, at least for someone as weather-cautious as me:

Trish did some baking and craft work: 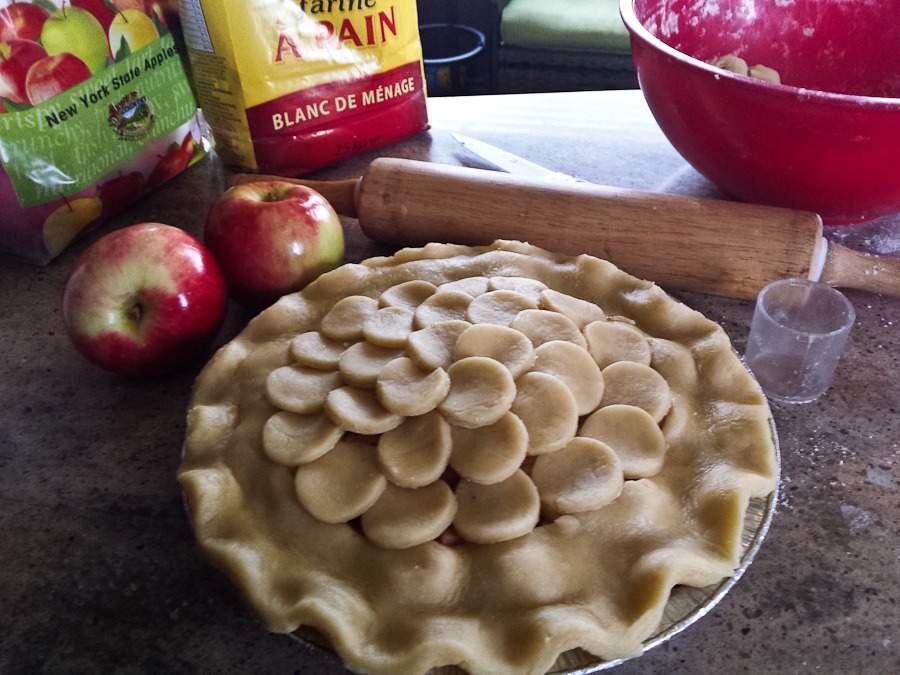 We had a great day of homeschooling, and I caught up with my Quicken. All in all a great day!

Today we said goodbye to the Moncton Casino after replenishing our gas, propane, and DEF.  We stopped at the information center in St John, New Brunswick to dump sewer and fill fresh water.  We then crossed back into the US in Calais, Maine.  Unlike our entry into Canada from the US, the US border agent poked around the RV for a bit before letting us proceed.  On the way to Bangor we had a gas station incident when the nozzle trigger was somehow already engaged so when the latch was flipped to start the pump, the nozzle sprayed diesel everywhere for a second or so until I disengaged the nozzle trigger.  Good times!

In Bangor, we were planning to pick up a couple packages at our friends’ house, but at 6:30pm UPS still hadn’t delivered, so we had dinner in a supermarket lot.  By the time we were done the package had arrived:

We continued on, stopping at Walmart to buy groceries before arriving at Merrymeeting Field in Bowdoinham, Maine.  We stayed here four weeks ago on our way up to Canada, so we’re thrilled to be hosted here again!  The weather doesn’t look good, but hopefully I’ll be able to get in a flight or two like I did last time we were here.

After finishing homeschool fro the day, we drove out to Quoddy Head State Park, the easternmost point of land in the continental US.  The state park is the home of the West Quoddy Head Light, which wasn’t doing much good today on account of the thick fog:

After walking around for a bit we drove into Lubec.  The bridge to Canada’s Campobello Island disappeared into the fog: 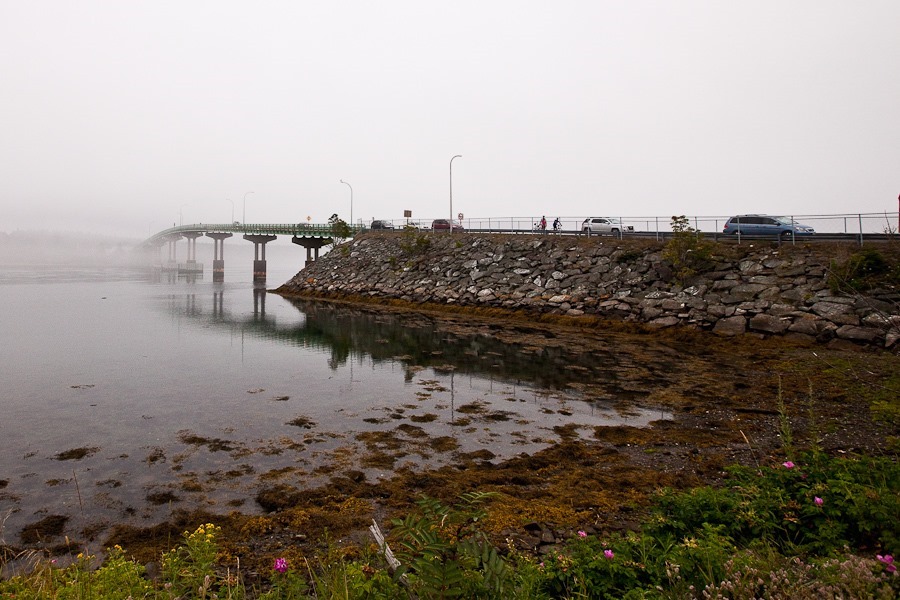 We drove through the two blocks of downtown Lubec.  Most of the shops were closed, so we continued on and drove back to the RV.

This morning we left the RV early and drove the truck across the bridge from Lubec, Maine to Campobello Island, New Brunswick.  We had an easy border crossing:

We arrived at the northern tip of the island, where Head Harbour Lightstation is located.  Campobello Island is in the Bay of Fundy, best known for its extreme tidal range of up to 53 feet, much greater than the worldwide average of two feet.  The lighthouse is on an island, but for a couple hours centered around low tide, it’s possible to walk from the mainland across the sea floor to another island, then across the sea floor again to the island that houses the lighthouse.

The lighthouse in the distance:

We started down the ladder to get to the lighthouse:

There’s a bridge between the first and second islands:

Down the staircase to walk across the sea floor to get to the third island:

It’s hard to believe that this area will be deep under water in a few hours:

We explored the lighthouse complex:

Worrying about the tide, we started walking back towards the mainland:

We decided to hang out for a while on the bar, which even in the fifteen minutes since we first walked across it has narrowed considerably:

We saw jellyfish like this still in the water with light reflected off their cilia, causing them to appear to blink on and off:

After another 15 minutes, the sea reclaimed the bar.  The tide rises at a rate of five feet per hour, which is one inch per minute:

Driving back down the island, we passed this boat graveyard.  Locals tow their unwanted boats up here at high tide and just leave them:

Our next stop was Roosevelt Campobello International Park, which preserves the summer cottage of President Roosevelt and his family:

It’s called a cottage not because of its size but because it has no insulation and is therefore only usable in the summer:

The house is over 10,000 square feet in size and has dozens of rooms for the Roosevelt family, the president’s political advisor, and their six maids:

This board would indicate to the maids which room was ringing for service:

B photographed the gardens:

The visitor center had one side of the exhibit space devoted to the Roosevelt story, and the other half devoted to the close relationship between the US and Canada.  This is an international park, funded equally by the NPS and the Canadian parks commission and staffed by personnel from both countries:

We drove out to walk the boardwalk through Eagle Hill Bog.  Along the walk we spotted a carnivorous pitcher plant which eats insects by drowning them in its water-filled pitchers:

Looking out over the bog:

We saw this little squirrel on the walk back:

Blueberries in the bog:

Our last stop of the day was the Mulholland lighthouse, which protects the international channel:

From the lighthouse, we could view Lubec, Maine across the channel.  The three black dots in the water are harbor seals:

We crossed back into the US and returned to the RV where we did homeschool and a bit of art:

Surprisingly, the airport fogged this afternoon, so I won’t be flying tonight:

Today we said goodbye to Bruce and Naomi and their kids.  B made a new friend in Bangor, and asked if we could move here.  We carefully maneuvered out of their driveway onto the street:

We drove east, stopping to overnight at the Airport in Lubec, Maine, the easternmost town on the US mainland:

We had a beautiful sunset:

Trish did some doodling during the drive today: