This morning we went into Santa Fe for Purim to hear the Megillah reading.  When we returned to the RV, M as having trouble with his R/C car charger, so we cut out the section of the cord that was damaged and did some soldering to rebuild the cord:

This afternoon, we returned to Santa Fe for laundry and propane.  We also delivered shalach manos to the owners of the tire shop and book store that we visited last week.  In both cases, they mentioned they were Jewish when we were there.

We then went to a family for the Purim Seudah.  B is sporting new face paint today:

The meal was medieval-themed, and included many authentic dishes from the Middle Ages.  There were about 20 people there, and the food, wine, and company were excellent:

Today we visited the Georgia O’Keeffe Museum with my parents:

The museum houses some of O’Keeffe’s drawing and painting materials:

Near the museum, there’s an interesting outdoor art installation:

Trish did B’s face painting in preparation for Purim, which begins tonight:

The synagogue in Santa Fe is very small.  It was inspiring to be here, the only Nusach Ashkenaz synagogue in New Mexico, in a town with less than 70,000 residents:

The kids in costume:

My Purim bowtie was a hit:

Today my parents came by the RV and we headed up to Bandelier National Monument:

We watched the visitor center film and then checked out the displays:

Next we walked the trail that leads out to the dwellings:

The naturally soft ash layer was used by Native Americans for housing.  They both lived in caves and in dwellings built against the cliff wall: 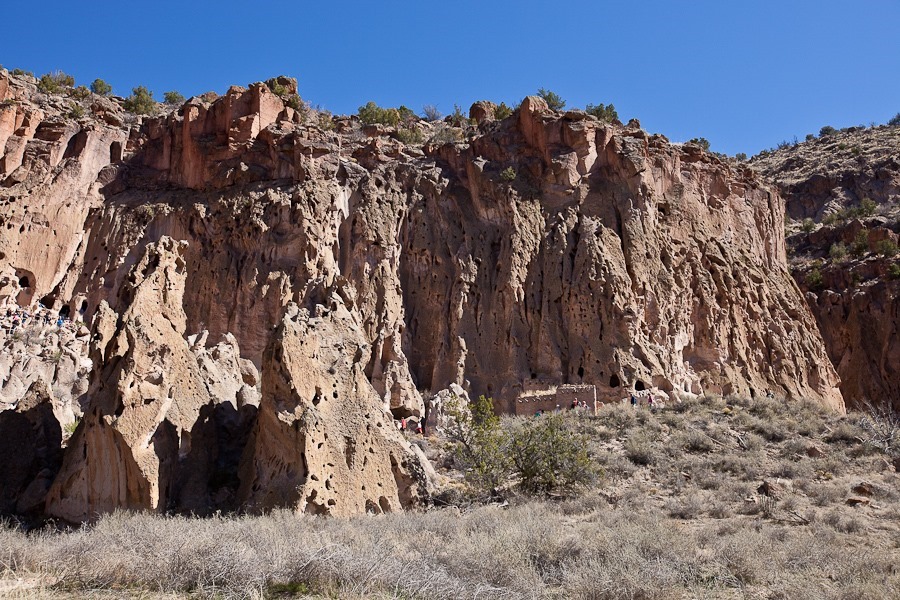 We walked through and then onto a ledge above Tyuonyi Pueblo, built in the late 1300s and thought to have had several hundred residents:

This model from the visitor center shows what the pueblo probably looked like when it was in use.  Rooms had no doors or windows.  All access was through holes in the roof:

We followed this path up against the cliff face to view the caves in which some Indians lived:

I climbed up into one of the caves:

The kids and Bubbe came up too:

This dwelling is called the Long House:

The lines of holes in the cliff wall are sockets for floor and ceiling beams:

The kids completed their Junior Ranger workbooks and received their patches.  M received the Deputy Ranger patch for his age group:

B received the Junior Ranger patch:

We continued west to visit Valles Caldera National Preserve, which preserves the Valles Caldera, a volcanic caldera almost 15 miles across.  The two eruptions that created the caldera ejected 500 times the material ejected by the 1980 Mount St. Helens eruption.

We stopped at an overlook inside the south rim.  Looking north, the mountains in the distance are lava domes inside the caldera that were created by later eruptions.  The northern rim of the caldera isn’t even visible from here:

We stopped by the visitor center:

In a not to the preserve’s ranching past, the Junior Ranger program here is called Junior Cowhand, and the kids had to do a variety of activities including roping this horse:

The kids handed in their worksheets and received their badges:

Parting shots of the caldera:

On our way back, we photographed Camel Rock.  I had thought that Camel Rock was only the toadstool-like formation, but I now see that the toadstool is the head of the camel and the hill to the left is the camel’s body:

Today we visited Los Alamos with my parents.  Our first stop was the Los Alamos Historical Museum, temporary location for visitor contact for the newly formed Manhattan Project National Historical Park.  Unfortunately, there’s no Junior Ranger workbook for the Los Alamos location yet.  We did enjoy the museum:

We next visited the Los Alamos Nature Center:

The nature center has a dozen terrariums showcasing animals from the area:

This Wolf Spider was the largest non-Tarantula spider I’ve ever seen:

The kids experimented with the video microscope:

This ant terrarium connected through a hole in the “ground” to this exposed ant colony below:

Our last stop of the day was the Bradbury Science Museum, the de facto visitor center for Los Alamos National Laboratory:

This interactive display allowed the kids to explore Los Alamos as it looked during the Manhattan Project:

After our visit to Los Alamos, we returned to the RV where we had a birthday party for B and Bubbe:

After dinner, my parents returned to their hotel in Santa Fe and M played with his new R/C car.  It was considerably cheaper to order the car directly from China, but it took 18 days to arrive from China, so we had to carefully decide where to have it shipped, and the intervening days were an agonizing wait for M.  We picked up the car yesterday in Santa Fe, and today M drove it around:

It didn’t take long for M to get the hang of it:

Shabbos at the Camel Rock Casino was restful and quiet.

Today we assembled our shalach manos for Purim:

Trish organized all the items she’s crocheted in the last few weeks:

My parents came up from Las Vegas to spend a few days with us here in Santa Fe.  We spent a couple hours chatting in front of their hotel:

My parents brought with them the Junior Ranger badges for those sites we had visited in the past and just now received the badges.

We’ve crossed the Juan Bautista de Anza National Historic Trail several times on our trip, so we submitted the workbooks and received the badges:

When we visited Ellis Island and the Statue of Liberty this past autumn, those sites had run out of badges, so we received them now.  Since both sites are part of the same NPS unit, we received two identical badges, even though each site had its own Junior Ranger workbook:

We visited Fort Pulaski in 2012 but didn’t hand in the workbooks during our visit:

We picked up a few packages and filled up our water in Santa Fe and headed back to the RV.  M received his much-anticipated R/C truck today, but more about that tomorrow: