It was a beautiful morning in the Huachuca Mountains:

We drove North to Fort Huachuca.  It’s an active military base, so once we cleared the security checkpoint we drove to the museum area.  We visited the museum annex first, which had a mock town set up inside, and talked about the history of the area:

Like Fort Bowie, For Huachuca was set up to suppress the Apache Indians.

At the main museum, the entire history of the base was discussed:

From there, we drove Northeast to Tombstone, AZ.  It’s set up as a tacky tourist trap, with the entire downtown having been converted to shops:

These “cowboys” shout out attractions for tourists to visit:

Our daughter succumbed to temptation:

We went one block North to the actual location of the gunfight that made Tombstone famous:

The actual alleyway where the fight occurred has been fenced off.  Tourists can pay to watch a reenactment of the fight inside:

The county seat is a beautiful building:

From Tombstone, we drove West to the ghost town of Fairbank.  I found the history of Mexican land grants in the US to be especially interesting.  BLM has restored what few buildings remain.  It’s hard to believe that this was a town of hundreds of residents relatively recently:

The schoolhouse functioned until the 1950s:

From Fairbank, we drove West to our camping location at Las Cienegas National Grassland.  We had read about this location on the WheelingIt blog, and it was described as being virtually deserted.  When we pulled in, we found 20 other RVs here already.  We parked away from what is obviously a group.  There’s a water truck here, a dumpster, and everyone has horses and dogs.

As the sun set, the endless grasslands began to glow, and I photographed this horse silhouetted in the dust it was kicking up: 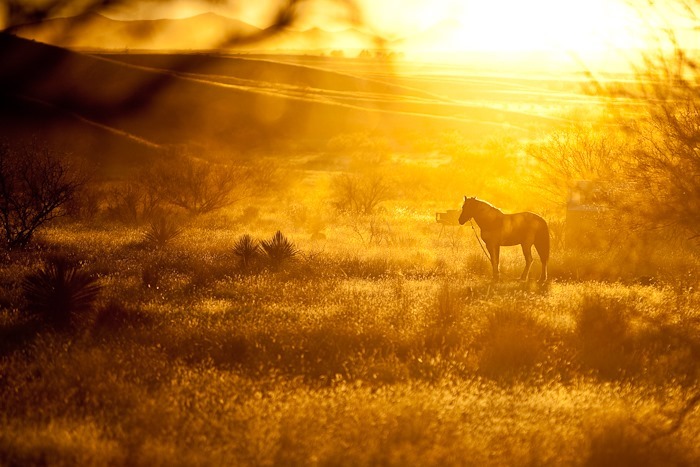