Today we dropped Trish off for some alone time at the spa.

Okay, so actually it was at the Laundromat, but Trish likes the time away from the family.

I took the kids to Rock Creek Park, an NPS site that includes an equestrian center:

Some of the horses were decorated for Halloween: 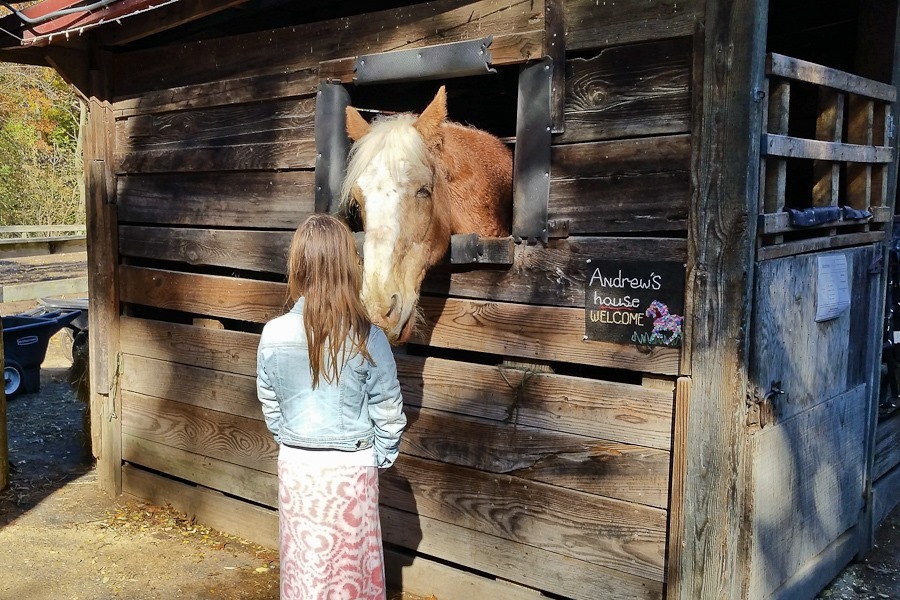 We next visited the visitor center:

We hiked a nature trail on the grounds.  The kids completed their Junior Ranger books and received their badges and patches:

Trish and the kids went ice skating in the afternoon:

I went out for a ride this afternoon:

Our first stop of the day was Wolf Trap National Park for the Performing Arts, the only NPS site dedicated to the performing arts.  The site was created by the donation of land by Catherine Filene Shouse:

One of several performance spaces at the park: 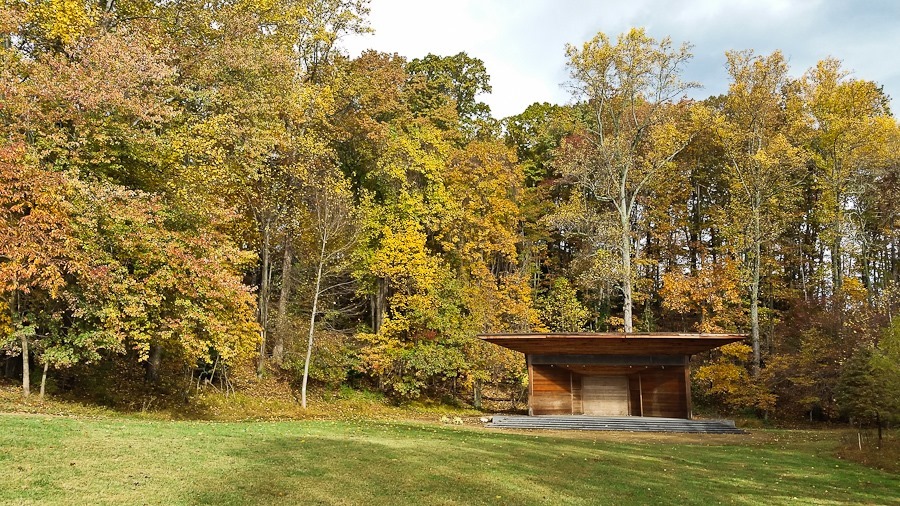 The kids completed their Junior Ranger workbooks and received their patches and badges:

Our next stop was Great Falls Park, a unit of George Washington Memorial Parkway:

M tried out the whitewater kayak in the visitor center:

The visitor center had an impressive Junior Ranger display:

The now-dry Patowmack Canal, built by a company founded by George Washington before he was president.  This portion of the canal was a bypass for Great Falls.  The canal was ultimately a financial failure:

We next visited the Chesapeake and Ohio Canal National Historical Park:

A mule would walk along the path on the far side of the canal and pull the canal boat along:

Our next stop was Clara Barton National Historic Site, which shares a parking lot with the NPS site Glen Echo Park, a defunct amusement park converted into a public arts and culture site:

This house, built for Clara Barton when she was in her 70s, served as the first headquarters for the organization she founded, the American Red Cross: 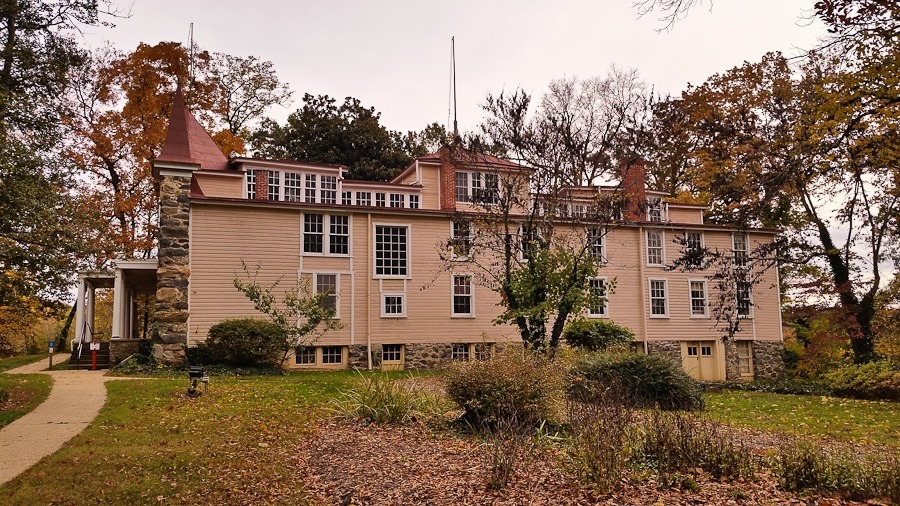 The house is closed for repairs, but we were able to walk around the building:

We walked over to Glen Echo Park:

There was a separate workbook that focused on the desegregation protests at Glen Echo Park in the 1960s:

The kids also completed the workbook for George Washington Memorial Parkway, of which Glen Echo Park is a unit:

There was also a workbook for the 150th anniversary of the Civil War, which drew on knowledge gained over the last few days at Gettysburg, Monocacy, Harpers Ferry, Antietam, and Manassas:

This ranger station is the administrative headquarters for Theodore Roosevelt Island National Memorial, so we completed that workbook here as well:

We walked the grounds of the park:

Various buildings in the former amusement park have been converted to art workshops and galleries.  We briefly visited the glass blowing studio:

A bumper car from the amusement park:

Goofing off on the way back to the RV:

We drove northeast to overnight at the Kemp Mill Synagogue, where we will be staying through Shabbos.

This morning we drove south to Manassas National Battlefield, site of the first major battle of the Civil War.  Civilians came out to watch the battle, and many thought this would be the first and last battle of the war:

This display has lights imbedded in the terrain which illuminate in synchronization with the narration to explain the order of battle:

After watching the park film, we toured the visitor center:

After three days straight of Civil War sites, we were glad to get away from that subject and visit the Steven F. Udvar-Hazy Center annex of the National Air and Space Museum:

A Lockheed SR-71 Blackbird, the fastest aircraft ever made:

Looking up into the instrument unit ring of a Saturn V rocket:

The restoration hangar.  In the foreground are the wings and fuselage sections of a B-26 Marauder:

A Mobile Quarantine Facility, an airstream RV converted by NASA to house the astronauts after landing while they were being checked for contamination by extra-terrestrial microbes:

Here it is in use:

The Virgin Atlantic GlobalFlyer, the airplane that made the first solo nonstop flight around the world in 2005:

The Gossamer Albatross, winner of the second Kremer prize by being the first human powered aircraft to cross the English Channel:

There was a display board about Operation Migration:

A Boeing 307 Stratoliner, look at all that chrome:

The Enola Gay, the B-29 that bombed Hiroshima:

After touring the museum, we drove to the nearby Walmart of Chantilly, Virginia to overnight.  Trish worked on her latest craft, crocheting:

M tried on some period gear:

We left the RV at Monocacy National Battlefield and drove west to Harpers Ferry National Historical Park.  We took the shuttle bus from the parking lot to the historic district.  It wasn’t as scary as the kids made it out to be:

This outline is all that remains of one of two armory buildings briefly captured in John Brown’s Raid:

The firehouse in which John Brown was captured by then-US Colonel Robert E. Lee:

This obelisk marks the original location of the firehouse.  At some point, it was moved to allow the building of a railroad and now is located on the left side of the photo a few hundred feet away:

We walked across the Shenandoah River:

On the far side, we walked under the bridge while a train thundered by above:

From here, we could see Lock 33 on the Chesapeake and Ohio Canal.  The canal was destroyed by flooding in 1924, so its now an empty ditch:

We returned to the visitor center where the kids handed in their Junior Ranger workbooks.  The kids completed all three levels in the workbook, and received the corresponding three badges:

While Trish and B took the shuttle back to the parking lot to pick up the truck, M and I walked to the Appalachian Trail Conservancy office in modern-day Harpers Ferry, the host site for the Junior Ranger workbook for the Appalachian National Scenic Trail:

The kids worked on their workbooks in this simulated trail shelter:

The kids completed their workbooks and received their badges and patches:

We next drove north to visit Antietam National Battlefield, site of the Battle of Antietam, the bloodiest single-day battle in US history with a 22,717 combined total of dead, wounded, and missing:

The driving tour took us to the sunken road, also called bloody lane, where the two armies combined suffered 5,600 casualties over a four-hour period:

The kids completed their workbooks and received their Junior Ranger badges:

We drove back to Monocacy National Battlefield, picked up the RV, and drove south to overnight at the Walmart of Leesburg, Virginia.  See the trip map for today’s drive and our current location.

We were disappointed to discover that the park’s visitor center is some kind of private/public partnership.  Want to view the exhibit space?  You have to pay.  View the park video?  You have to pay.  We did the driving tour.  It was interesting to see famous location names on the street signs:

The seminary at Seminary Ridge still stands today.  On the morning of July 1st, 1863, General John Buford climbed to the cupola and spotted approaching Confederate troops, setting in motion the events that history would come to know as the Battle of Gettysburg:

Looking from the Virginia monument towards Cemetery Ridge, where Union troops waited for and ultimately repelled the Confederate attack:

A monument to the New York defenders of the hill:

The right flank marker for the 20th Maine.  Here the 20th Maine ran out of ammunition.  Lt. Col. Joshua Chamberlain ordered his men to bayonet charge down this hill, scattering Confederate attackers intent on flanking the Union army.  The 20th Maine’s actions prevented a Union loss at Gettysburg:

Gettysburg Battlefield is covered with over 1,000 monuments to various states, companies, regiments, and battalions:

Our final stop here was the Gettysburg National Cemetery, where Lincoln gave his famous Gettysburg Address:

Graves of the unknown soldiers:

Known graves are organized by state:

The kids completed their Junior Ranger workbooks and received their patches:

We had intended to visit nearby Eisenhower National Historic Site, but the site is only accessible via a rather expensive shuttle bus.  Walk-ins are actually expelled from the site.  We decided to skip it.

Continuing south, we arrived at Catoctin Mountain Park.  Originally designated a Recreational Demonstration Area in the 1930s to create jobs for the WPA, this land was eventually supposed to be returned to state control but was redesignated as an NPS site.  Presidential Retreat Camp David is in the center of the park, its access road designated with a sign that says “Camp #3 – Closed to Public”.  Satellite imagery reveals parallel fences with a cleared no-mans land between them.

We parked in the empty bus lot:

The visitor center was small, focusing on the history of the site as well as plants and animals that can be found here.

The ranger would not talk about Camp David, but we did have an interesting discussion about deer overpopulation and the NPS response to the problem.  The kids completed their Junior Ranger workbooks and received their badges:

We continued on to overnight at the Walmart of Frederick, MD.  See the trip map for today’s drive and our current location.