This morning, we left the visitor center parking lot at Tombstone Territorial Park and drove back down the Dempster Highway to pick up the Klondike Highway into Dawson City, epicenter of the Klondike Gold Rush of 1896.

In the visitor center, a pair of moose skulls were on display.  Biologists suspect that the pair became tangled with one another while sparing, and died of starvation.  This is all that was left by the time they were found:

We walked around the town of 1,300 people, admiring many of the original buildings still standing:

Some buildings are really small:

Some of the buildings were in pretty bad shape.  This is what happens when permafrost melts under half of a building’s foundation but not under the other half:

We left the RV in town and drove to Dredge #4, the largest wooden-hulled bucket dredge in North America.  The dredge floats in a pond, digs up the dirt in the pond, separates out the gold, and dumps the tailings behind it.  Dredge 4 worked until the 50s, and was just recently restored:

One of the buckets used by the dredge:

This is the chute through which the tailings were ejected:

Continuing South, we stopped at Bonanza Creek, where the Klondike Gold Rush began.  We did a bit of panning, but did not find any gold, which is not too surprising since this area has already been dredged:

Having read about them as we travelled through the area, B built a family of small Inuksuks:

Returning to Dawson City, we drove West out of town on the Klondike Highway but very quickly ran out of road.  The only way across the Yukon River at Dawson City is a 12 car ferry that shuttles vehicles back and forth 24 hours a day.  We used up one of the two lanes on the ferry, and the other lane had six cars in it:

Looking back towards Dawson City as we plowed through the 10 knot current:

We photographed the ferry as we drove away from it on the far side of the river:

Driving now on the Top of the World Highway, so named because it follows a ridge line, we continued West until we reached the Poker Creek border crossing.  It was much easier getting back into the US than it was to enter Canada.  After clearing the border, we played the national anthem and teared up bit.  Canada has been great for the last two weeks, but it’s nice to be home:

About 10 minutes after crossing the border, I felt a sudden drag on the RV, as if the brakes were on.  I pulled over right away to find the rear axle of the RV at a less than ideal angle:

The bolt that holds the springs together had failed, allowing the axle to slide up and back along the leaf spring into the stairs, bending the stairs back and crushing adjacent paneling:

Walking back up the road, I found the missing springs:

The jack that comes with the truck wasn’t that strong, but it’s all that I had, so I started jacking up the RV:

After a little while, a trucker stopped to see what was amiss:

Since I didn’t have a replacement spring bolt, I clamped the remaining springs together and then pounded the springs that had fallen out in between the spring stack and the axle perch:

The trucker gave me a large strap which I used to hold the rear axle to prevent it from sliding back:

With the axle in its correct, lowered position, I couldn’t get the tire back on, and the jack wouldn’t lift any more weight, so I dug a hole in the ground to allow the tire to be bolted onto the axle: 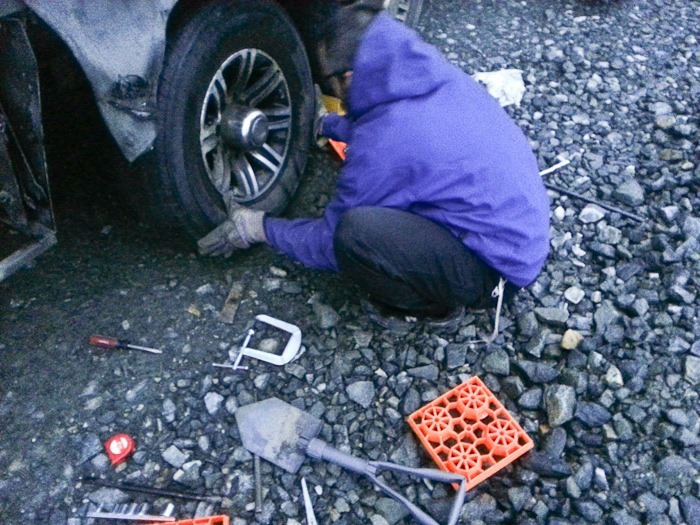 Thus jury-rigged, we drove very slowly for three miles until we reached a pullout at Jack Wade Junction, the Western terminus of the Top of the World Highway.  We arrived at 2:30AM Canadian Time, about 6 hours after the axle failure:

Tomorrow, I’ll drive the 3 hours to Tok, Alaska.  We have no phone or wifi up here, but I assume Tok has an auto parts store where I can buy better jacks and replacement hardware to permanently reattach the axle to the RV.  See the trip map for today’s drive and our current location.

This morning we drove from our Shabbos roadside campground to the visitor center at Tombstone Territorial Park:

The view from the parking lot was stunning.  In Tombstone, the “Patagonia of the Yukon”, Boreal forests give way to Tiaga and then to Tundra:

We left the RV at the visitor center and drove North to an overlook:

Continuing North, we crossed a river with glacier-like ice formations:

There were ice caves beneath the “glacier” in several locations:

This 6-inch high crack went all the way through to the other side:

In places, the ice formed 6-inch long fibers that fell off the ice shelf with a little effort:

After continuing North for another 20 miles and failing to see Moose at Two Moose lake, we went for a hike across the tundra.  The thawed surface soil site atop permafrost, so when the surface soil thaws there’s nowhere for the water to go.  Walking on Tundra feels like walking on a giant kitchen sponge:

Tundra vegitation is only inches high and is primarily mosses and lichens:

On the way back, we passed a parent and child fox who had caught a ptarmigan:

We hiked up to the shoulder of Goldensides Mountain:

Quite the view from the top:

After the hike, we drove back to the visitor center, showered, had dinner, and decided to overnight in the parking lot, which was OK since the campground was full.  Tomorrow we’ll head into Dawson City, where the Yukon gold rush began!

Today we visited the Yukon Territorial government offices here in Whitehorse, the Territorial capital.  The building is about as big as you would expect for the seat of a territory with 37,000 residents:

We received a great tour of the Assembly chambers.  The Yukon Territorial Assembly has 19 members, 12 of which are from the majority party.  They meet for 60 days every spring and fall:

In the hall, there was a display about the ceremonial mace, without which proceedings cannot begin:

There was a 20+ pane stained glass mural depicting the history of the Yukon running the lenth of the building.  This is the beginning of the mural:

We walked a couple blocks to the SS Klondike, one of the sternwheelers used to carry gold from Dawson City to Whitehorse and supplies the other way:

The SS Klondike had dining and lodging for 24 first-class passengers:

The Yukon rivers flows on by at quite a clip:

M may have lost his wallet:

Even Whitehorse has its hoodlums:

Heading North, there were several places to walk down to the Yukon River:

There were butterflies a plenty:

After a few hours driving, we reached the junction with the Dempster Highway, and drove towards Tombstone Territorial Park:

Good thing we filled up on gas at the junction:

After an hour or so of driving the Dempster Highway, we reached a streamside pullout to camp in over Shabbos.  Sunset here is at 12:46AM.  Here are views of our site at around 11:45PM:

North on the Dempster:

A lot of water and mud gets thrown up onto the underside of the fifth wheel.  The front compartment is leaking a bit as a result:

After the mud flap installation, we drove into downtown and visited the MacBride Museum of Yukon History.  The museum had an impressive collection of native animals:

Sam McGee’s cabin was also on site.  Robert Service, a bank teller at the time, met Sam and asked to use his name in the now-famous poem, The Cremation of Sam McGee.

Old stagecoaches that used to travel between towns during the gold rush:

Is this a compliment?

This is the first electric generator that served the area.  Pressurized water was shot into the cups on the left, which turned the generator:

Back at the RV, we spoke to the driver of this contraption, a 24 passenger tour bus with 24 sleeping births in the back.  The hallway for the sleeping births slides out on the passenger side, and the passengers find their birth and climb a ladder if necessary to get in.  Looks a little tight to me, but it’s pretty neat:

Before dinner, I finally got around to pulling out the over-range microwave oven and installing in its place a medicine cabinet door salvaged from the bathroom remodel:

Despite encouraging the kids to not play with their food….

We hope to get an early start tomorrow, visit the SS Klondike, and then head North.

Today I shopped at the hardware and auto parts store, caught up on Quicken, and did some other work.  The kids did homeschool and experimented with soap breaking surface tension in milk with food coloring floating on top:

Tomorrow we hope to take in some Whitehorse sights before heading North.