This morning we left the Walmart of Port Angeles and drove west to the town of Forks, Washington.  Forks is an unremarkable town, but it happens to be the setting for the Twilight series of vampire novels, along with the village of La Push on the Quileute reservation.  From Forks, we turned off US 101 and headed West towards La Push.  Along the way, we spotted local features targeted towards fans of Twilight, who no doubt provided a healthy economic boost to the region, especially during “Stephenie Meyer Day” every September:

At last we reached Rialto Beach, which is within the coastal unit of Olympic National Park and is across the Quillayute River from La Push.  It was a typical cloudy day on the Washington coast:

Rialto Beach is a sandless beach made up entirely of pebbles.  James Island is just offshore: 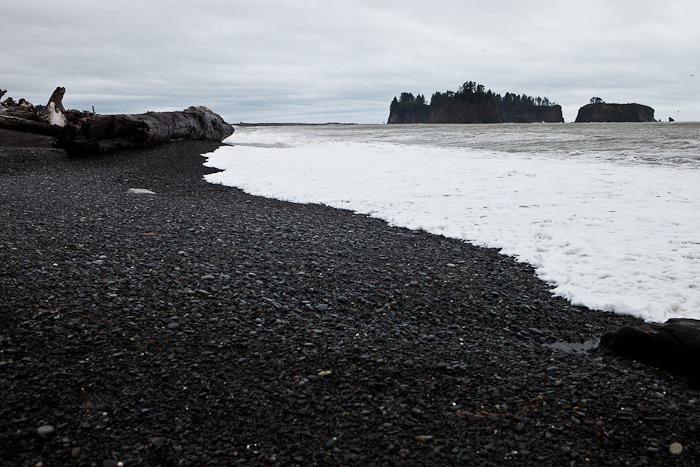 Sometimes retreat is in order:

From Rialto Beach, we drove back to Forks, then continued south until the turnoff that took us east into Olympic National Park’s Hoh Rainforest.  Hoh receives 140 to 170 inches of rain per year, making this area the wettest part of the continental US.  With all this water, plant live thrives so there’s intense competition for real estate.  As soon as a tree falls over, plants start to grow on it, since seeds that fall on the tree trunk aren’t in the shadow of already established plants on the ground:

Moss festoons everything that doesn’t move:

Another view of the fallen tree.  Note the saplings growing out of it:

Trying to move a tree:

Many trees here have vaulted roots, as they started life on a fallen tree which has since rotted away:

A foggy day on the Hoh River:

This row of trees is growing out of a single fallen tree trunk:

The kids examine a slug:

Up close with moss:

Even streams are choked with plant life:

We left Hoh Rainforest and continued South to Ruby Beach, which is also within Olympic National Park:

It was low tide, so we were able to walk around on the rocks which are underwater most of the time:

Marine life thrives on these rocks:

We even found small fish swimming in some of the tidal pools:

On the trail down to the beach, we found a credit card, and we managed to find its owner down at the beach.  She was very happy!

Leaving Ruby Beach at sunset, we drove south to overnight at the Quinault Beach Resort and Casino which is beachside near Ocean City, Washington.  We will be staying here as guests of the Quinault Nation for a few days, enjoying the beach here.  See the trip map for today’s drive and our current location.

Update: The kids completed a podcast for today, play it below:

This morning, we left Burlington before sunrise and drove to Anacortes, dropped off the RV in a parking lot, and got in line to board the 9:30am ferry to San Juan Island:

The ferry can hold about 150 vehicles:

Apparently this is not the busy season:

Watching the world go by:

While onboard, the fire crew went through their monthly drill:

Another ferry going the other way:

People leave jigsaw puzzles on the ferry for passengers to work on as they travel:

After about an hour, we arrived in Friday Harbor on San Juan Island:

After driving off the ferry, we drove to the South side of the island to visit the American Camp unit of the San Juan Island National Historical Park, site of the Pig War that culminated in decisive US ownership of the San Juan Islands.  The Americans built a military outpost here to protect US citizens from expulsion from the island by British Forces while ownership of the island was in question.  Unfortunately, the visitor center is only opened from Wednesday to Saturday, so we weren’t able to get Junior Ranger badges here:

The two buildings above are on the left side of the period photograph below:

An artillery redoubt built to overlook the shore:

We hiked the southern shore of the island:

Slug on a mushroom:

We drove South to view the Castle Point Lighthouse:

Next we drove North to visit a Lavender farm:

Continuing North, we visited the British Camp on the island:

The British had a formal garden here:

Next we visited a sculpture garden that includes a horizontal tree trunk with an engraver next to it.  Visitors are encouraged to carve on the log.  Trish carved this fish:

B left her mark as well:

This mirror-on-an-easel piece was pretty neat:

Back on the ferry:

Coming to the island, the trip was direct from Anacortes to San Juan Island.  On this return trip, we had an intermediate stop at Lopez Island:

Since we happened to be on the same ferry on the way back, the kids tried to find the jigsaw puzzle they worked on this morning.  Unfortunately, someone must have finished it and put it away while we were on the island, so we had to start over.  It was very nearly finished by the time we returned to Anacortes:

It was a long day, but traveling by ferry and touring the island was great fun!

After departing from the ferry, we hitched up the RV and returned to Big 5 Sporting Goods in Burlington to overnight.  See the trip map for route details.

Update:The kids have recorded a podcast for today’s trip.  Play it below:

Today we reluctantly left our amazing Shabbos camping location at Magic Reservoir and drove North and East to Craters of the Moon National Monument.  The monument preserves a number of lava flows, the youngest of which are about 2,000 years old.  We first visited the spatter cones:

Looking down into the spatter cone:

The terrain is other-worldly, and was used for lunar surface training for the Apollo astronauts:

We hiked up to view a couple larger cinder cones:

Pumice is highly aerated, so it’s much lighter than you might expect.  Some pumice even floats!

Looking into another spatter cone:

Next we drove out to the trailhead for a lava cave:

We explored a short section.  The kids are off to the left exploring a tight little side passage:

In the visitor center parking lot, Trish befriended our neighbor:

The kids completed their Junior Ranger books and received their patches:

While Trish made a late lunch, I took the kids to another trailhead for a short hike:

It’s easy to imagine the lava flowing across the land:

After leaving the monument, we drove South and West to overnight at a truck stop in Bliss, Idaho.  See the trip map for driving details.

Update: The kids produced a podcast for today’s adventure:

The Salt Flats are submerged beneath an inch of water over the winter.  In the summer this water evaporates and leaves a smooth surface which is perfect for setting land speed records.  The flats are over 46 square miles in size:

‘We got the truck up to 75MPH, which felt plenty fast.  Hard to believe vehicles have been driven here in excess of 600MPH.

We also verified that the truck’s “ESC off” mode works, though it does take a bit of doing to do a doughnut in a one-ton truck.

We also took the kids for a slow ride in the bed of the pickup:

Lightning was moving in, so we got off the flats and back to the RV:

From the flats, we continued West and North to overnight behind a casino in Wells, Nevada.  See the trip map for driving details.

UPDATE: The kids produced a podcast for today’s adventure:

Today the kids did some cookie decorating in the RV:

Meanwhile, I decided to ride to the summit of the road up Wheeler Peak.  The ride starts in town at 5,318 feet and ends 15.6 miles later at 10,163 feet, a vertical gain of 4,845 feet.  Outside Magazine listed this ride as one of the five best North American hill climbs.  The climb is longer and as steep as the Tour de France’s Hors Categorie climb of Col d’Izoard.

I left at 11am, and the first half of the climb was really hot.  Eventually, I climbed past 8,000 feet, and the temperature dropped considerably.  Up here, it’s already Autumn:

Looking at the switchbacks in the foreground and the start point, the town of Baker, in the background:

The higher I went, the deeper into Autumn I travelled:

At last I reached the summit, nearly one vertical mile above my start point.  The climb had more vertical than Whitney Portal but less than Horseshoe Meadows:

Wheeler Peak in the background:

I suffered two flats on the way down, but it was still a great ride!

Back at the visitor center, the kids received their Junior Ranger badges:

We watched the Park’s excellent video in the modern visitor center:

It was a little late to drive on to a new location, so we settled into a great dispersed camping spot I found on BLM land:

As I write this I can hear the swiftly flowing stream a few feet from the RV as well as a host of crickets.  Good night from Great Basin National Park!

UPDATE: The kids produced a podcast for today’s adventure: